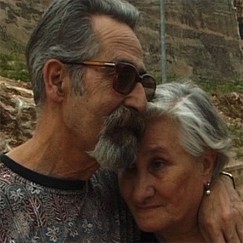 At the end of the Spanish Civil War, Andrew and Matilda arrive in France as children, carrying with them indelible marks of the war. Basing their lives upon the acquisition of a cultural identity in France they become a couple full of the joys of life. Andrew discovers Flamenco. They discover the works of Goya charged with a sensitivity to which they attribute colours, shapes and gestures reminiscent of their past. Artistic expression functions as mirrors helping them understand their origins. The other reference point, which marked the Spanish migration at the end of the 30s, was the Spanish Republic. Everyone would return to Spain once the Republic was proclaimed. But as time passed, this goal transformed itself into a dream that became the great story of their lives.The return never came about. Their children grew up and they realized their lives were in France. Their children’s existence was proof that everything they had achieved, not always with ease, was inextricable. It is they themselves who are the result.