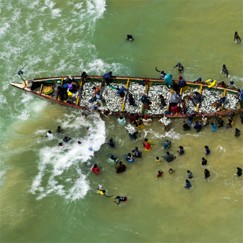 Mauritania: The Curse of Crude Oil

Since 2006 Mauritania has become one of Africa’s new oil producers. The offshore Chinguetti oil field, not as big as initially thought when it was discovered in 2001, is located near a marine Eco region which harbors the exceptional, but particularly vulnerable, Banc d’Arguin National Park. The operating platform, built from a single hulled old super tanker which has had its day, is installed in one of the richest fishing grounds in the world. Scientific experts, environmental organisations and certain members of the Mauritanian government are concerned about the durability of the installation, which is already showing signs of miniature cracks. This film attempts to understand the dilemma Mauritania is faced with and the curse that oil production can present in Africa.