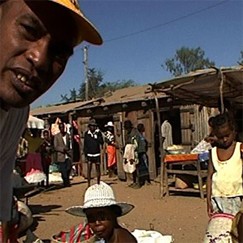 Since being elected mayor of Morombe, Solohery has worked hard to develop his city. Located on the west coast of Madagascar, Morombe is extremely remote. The trail connecting it to the rest of the country is in poor condition. There are no telephones. But Morombe boasts a sandy beach, a string of islands surrounded by coral reefs, the Mangoky river delta and Ihotry Lake nature reserve with its exceptional birdlife. Its geographical potential could attract tourists but, presently, it is inaccessible. For Solohery, finding the resources to develop his town was almost impossible. However, the eclipse of June 21st 2001 offered Morombe an opportunity because it was the only town on the west coast of Madagascar from which the eclipse could be seen above the sea from the beach. This phenomenon attracted many visitors despite the lack of infrastructures. In this film we follow the preparations for the eclipse and discover the challenges facing development in Madagascar.