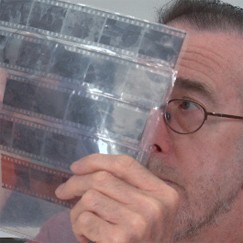 American documentary filmmaker Ross McElwee finds himself in frequent conflict with his son Adrian, who is no longer the delightful child he loved, but an argumentative young adult. He undertakes a journey to St. Quay- Portrieux in Brittany where he worked for a spring as a wedding photographer’s assistant at the age of 24 – slightly older than his son is now. He has not been back to St. Quay since that visit, and hopes to gain some perspective on what his own life was like when he was his son’s age. He also hopes to track down his former employer, a fascinating Frenchman named Maurice, and Maud, a woman with whom he was romantically involved during that spring 38 years ago. Photographic Memory is a meditation on the passing of time, the praxis of photography and film, digital versus analog, and the fractured love of a father for his son.